(Rebuilding) The Track Grandpa Made: An Essay

My Grandpa hard at work repairing his porch. It seemed, in my younger years, he always had some type of project he was working on.

The days, weeks, months, and sometimes even years, following a loved one’s passing can be a difficult time of readjustment and rebuilding a life without that person being a part of it. This has been the case in my life the last several weeks following the passing of my Grandpa Jim. My whole life, from infant to teen to adult, Grandpa lived in the house just next door to ours. Until 2009, my Grandma lived there with him and my Aunt Lori. Grandpa and Aunt Lori (with help from nearby family) worked together in caring for Grandma who had a massive stroke in 1997 which left her paralyzed on the right side of her body and limited her speech. After Grandma's death Aunt Lori stayed to take care of Grandpa and looked after him as his health started to deteriorate in the past few years. He was 92 when he died. 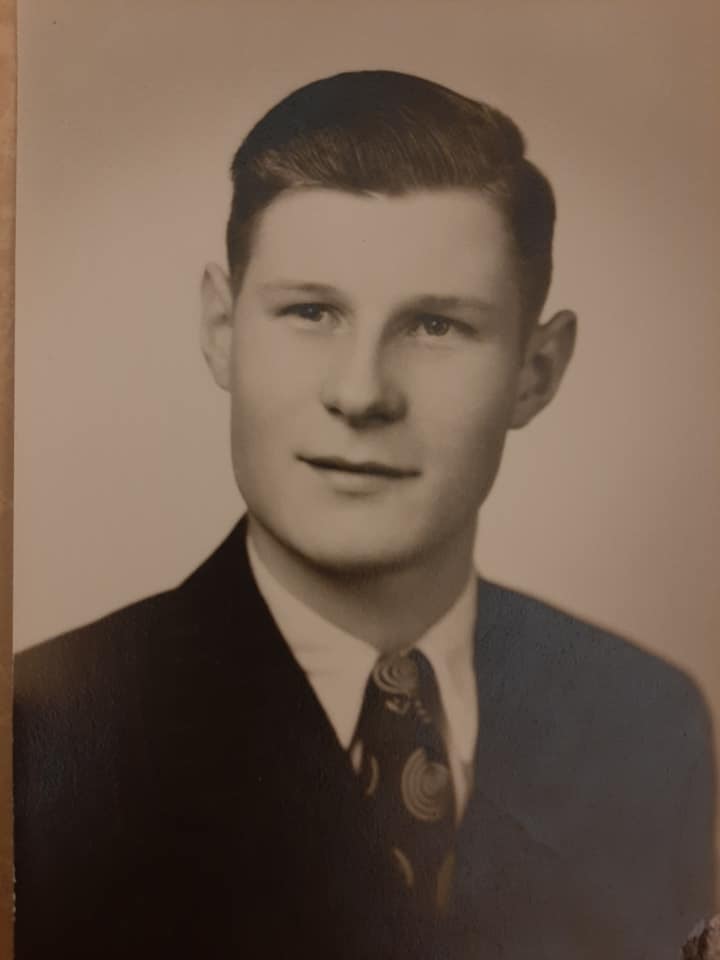 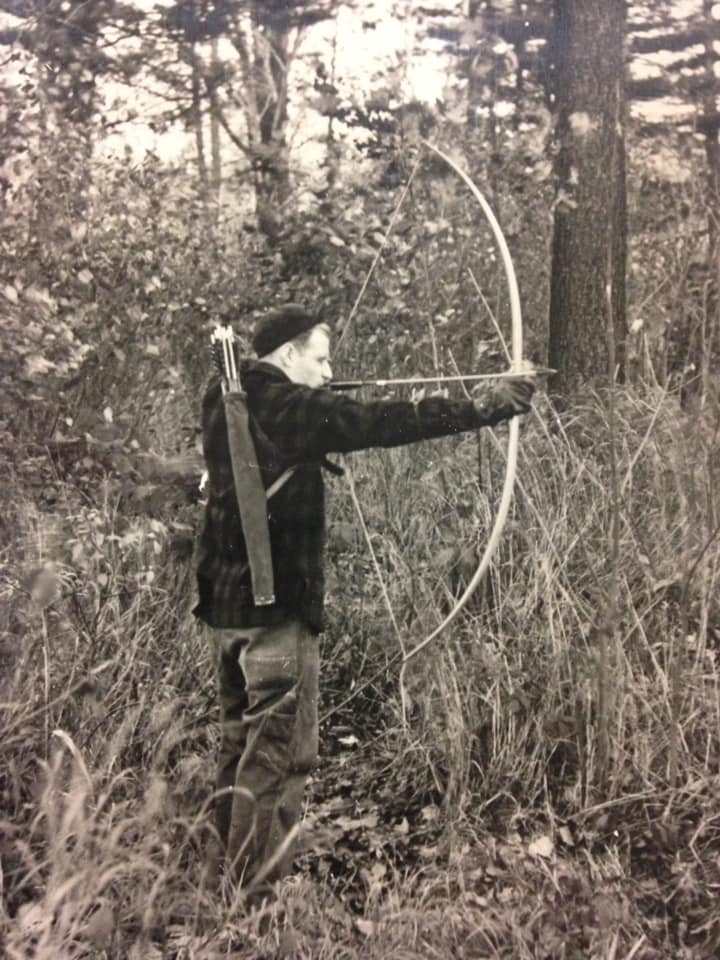 Grandpa in his younger days. On the right, Grandpa uses a bow he made himself.

My Grandpa had many passions he enjoyed throughout his long life. He took pleasure in playing hockey in his younger years, competing in dartball leagues, fly-fishing, hunting, and spending time at the camp he built in Cornell. Something else Grandpa dedicated much of his time to was woodworking. Cribbage boards, lawn chairs, baby cribs, cabinets, trophies for family competitions, deer antler mounts, among other things, were crafted upon his workbench. One of his projects, however, holds a very, very, special place in my heart.

The tools Grandpa used on all of his projects still hang above his workbench.

In the spring of 2004, Grandpa crafted a racetrack for me to call my own. Prior to this, carpets, rugs, and even tabletops, played host to races for my diecast cars. But now, I had my very own racetrack made by my Grandpa, no less. Happy, does not do justice to how I felt holding it in my hands the first time.

My Grandpa, however, was not a racing fan himself. Aside from trips to Norway Speedway with my Grandma in the 1950's, racing was never a big part of his life. That fact makes the track mean that much more to me, knowing he made it because I would enjoy it. The track was made from a sheet of wood, some nails, and oxygen tubing that had originally belonged to the gentleman who owned the house I grew up in before my parents owned it. It’s funny how things work like that sometimes. The tubing, nailed into the wood, lined the edge of the track on the inside and outside, leaving an infield section for spare cars.

The track was designed using a template Grandpa had made for crafting dog beds. As you can see, it is the perfect shape for a racetrack.

Upon initial construction, the track was a standard oval configuration with enough room for cars to fit two abreast. While this was good, I asked Grandpa to widen the track just a bit to fit three cars across. At the same time, I asked about the addition of a pit lane. He was happy to help with both. At first, I played with the cars as I had before, pushing them by hand around the track manually. It was fun, of course. I staged my own races, crashes, and photo finishes. Then I made a discovery. If I tilted the track just right, the cars would race around it themselves, jostling and passing organically. I had my own live races in my room most nights. Not only was it my first track, it was also my first announcing gig, too.

There is no major reason for this picture being in this story. It is just one of my very favorite pictures of my Grandpa.

As the years began to roll by, my Grandpa did less and less woodworking, fishing, hunting, and other things as his mobility and overall health began to decline. He still, however, enjoyed going to camp! With no one to modify my track, I became my own track designer, for better or worse. Before too long, the track was a shadow of its former glory. I had sanded the inside lane, cut grooves in the surface, and shaped and moved the oxygen tubing walls all over the place, so much so I had to cut down the radius of the entrance to turn one and the exit of turn four. The shape of the wood was the same, but the track was unrecognizable. A few days before he passed away, I brought my track over to show him and to thank him for making me the best racetrack in the world. He was in and out of consciousness and not fully aware of everything around him. I wish I could say he perked up and commented on the track, but he just couldn’t muster more than a mumble of recognition. In that moment, though, I knew he knew what that track meant to me, regardless if he could say it or not. I looked down at the track, and knew what I needed to do. I had to repair the track and bring it back to its former glory. No, I had to do more. I had to make it better than ever. I had to make it something Grandpa would truly be proud of. Restoration began two days after Grandpa died.

The track as it was days prior to Grandpa's passing.

Before any work started on the track, my dad and I cut out a section of the middle of the track then shaped it into an oval. That piece of track was placed with Grandpa in his casket and will remain with him forever. You can see this hole in most of the following pictures. The next item on the to-do list was to return the frontstretch outside wall back to its original place, then use more oxygen tubing to replace all of the inside wall that had been removed. For the outer wall, a patch piece of oxygen tubing was used to make up for missing tubing from previous track reconfigurations. My dad helped me at this point to grind some of the nails down on the bottom of the track to make sure there were no sharp points sticking out.

Once the walls were completed, it was time to patch up holes in the track from where the nails had been moved throughout the years (see above). To do this we used some glazing compound, as we did not have wood putty. It worked just as well. After filling the holes, the next step was sanding the track surface to ready it for paint. It was at this point we also sanded and varnished the underside of the track to help preserve it for years to come.

Before painting the track surface, the walls received several coats of paint. Taking inspiration from tracks like Darlington, Richmond, and the old walls at Bristol, the outside walls were painted white with red stripes. The inside walls remained plain white.

When the wall painting was complete, the track was next in line to receive a coat of black paint. After the paint dried, we treated the whole track with a clear coat. As that dried, I grabbed a garage Grandpa had also made for me and got to work on touching that up.

Before the garage was placed, my friend and neighbor Brian Bowden generously gifted me several diecast cars for the track.

The garage received a new coat of brown paint on its roof and a coat of varnish on its bottom. When all was dried and ready to go, the garage would be placed over the hole in the center of the track.

The whole project took about five days or so to complete, I kind of wish it would have lasted longer. Rebuilding the track was more to me than just fixing something Grandpa had made for me, it was a vital step of the healing process following Grandpa’s passing. Working on the track is now another link that will bond me and him forever, something that was not lost on me while working on it. The finished product (below) is something I know he would approve of!

Someday, when I have children of my own, they will play with this track. Maybe they won’t. Who knows? Regardless, I will have it and can tell them the story you just finished reading, and so much more. I know Grandpa isn’t here anymore, but I know he will always be with me. He was with me the first time I held the track. He was with me when I was rebuilding it. I’m sure he’ll be there with me and my kids when we play with it in years yet to come.

Grandpa and I, full beards and all, the day of my graduation from Bay College.

By Todd Rose If you enjoyed this piece, and think others you know might like it as well, feel free to share on Facebook or other various social media options below! For more of our work, check out our Feed Page for race reports, driver profiles, and more from the Rose Racing Report.

The Day Schrader Came to Town: An Essay

Obsession Five Hundred Miles Away from Home: An Essay